Louis Mangels arrived in New York City in 1866 with his parents. At 14 years of age he had just emigrated from Germany and immediately left for the West Coast, by way of Panama. There was a distant connection to the Spreckles, another German family that was already experiencing financial success in San Francisco. They arrived on June 22, 1866.

During the next ten years, through the Spreckles connection, Louis learned to be a cooper. He also studied and saved enough money to buy 240 acres of land in 1876. He planted grape vines. By the following year, Claus Mangels was born to the Louis Mangels family. Thirteen years later, in 1889, Louis expanded his operation when he purchased the inventory of the Schultz Brothers Winery. He continued working the ranch; and by 1893, Louis Mangels decided that it was time to build his first wine cellar. Solano Winery went on to become one of the largest producing wineries in the state of California.

By 1906, the Mangels winery was producing 500,000 gallons of wine a year. Just the year before, Louis's son Claus married Celia Rohwer. The family then took another interesting road to expansion. In 1910, Louis Mangels brought his two oldest sons into a business partnership, naming the company L. Mangels and Sons. By 1920, Prohibition hit the United States, with L. Mangels and Sons being one of seven wineries allowed to continue to legally produce wine for the government. A lot of the tonnage was shipped to the East Coast, to large eastern markets. Within a year, Claus Mangels became sole proprietor.

When it became unprofitable to ship grapes to the East Coast, a partnership with the Colonial Grape Products Company was formed. This entity became known as the Solano Grape Products Company. By 1932, the Solano Grape Products Company was incorporated under the name of Solano Winery. After Prohibition in 1933, the government began to bond wineries. "Solano Winery" became Bonded Winery Number 42. Claus planted more vineyards and leased another 153 acres with a Bonzi Vineyard at Monticello, in Napa County. After the repeal, the Solano Winery's wine cellar was well stocked with many products, including both aged (fortified) sweet and dry wines. The building and cooperage were rented from Claus Mangels. Wine sales were brisk, especially the Solano Winery "house" brand. This led to the selection of its own name, which became "Chief Solano." Other successful brands were Cordelia, Solano, and C. R. Mangels.

In just two years, the market for the Mangels wines had spread over the nation and to foreign lands. In 1936, 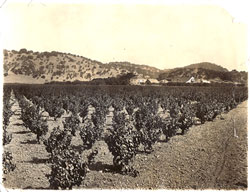 Claus Mangels purchased the stock formerly held by the Colonial Grape Products Company, which gave him 97 percent of the stock held in the company. One year later, Solano Winery was producing 350,000 gallons of wine a year, crushing nearly all of the grapes in Suisun Valley. By 1943, faced with the need to renovate and upgrade the winery, Claus Mangels decided to sell Solano Winery to Horace O. Lanza of Sunnyside Winery. Current production at that time was between 450,000 and 500,000 gallons of wine a year.

Horace O. Lanza was an official of the California Grape Products Company of San Francisco, and had been a business partner for six years during prohibition. With the sale, however, Claus maintained his home, vineyards, and other property. By 1950, the winery was no longer in operation. Claus passed away in 1950, and his son Lewis inherited the property. Lewis expanded the livestock operation while continuing to grow grapes for the Sebastiani Winery and Christian Brothers.

In 1973, Gary Mangels joined his father Lewis in the family ranching business. In 1988, Gary purchased land that 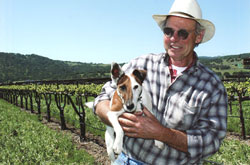 would eventually become Mangels Vineyards. He planted his first vines in 1991. Over time Gary has learned which varieties are best suited for his location in Suisun Valley. In 2009, Gary and winemaker Gina Richmond founded Mangels Vineyards.